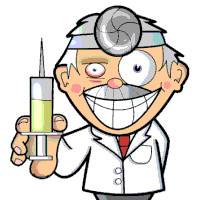 Today was another visit to the Neurologist for a new set of tests to update where I am at comparatively to where I was at a year ago, so they can re-apply for my Copaxone. All in all the tests were good, Resulting EDSS is stable at 2 which is good. They are still not definitively sure about the last episode I had and whether or not that was a true relapse or not, which in actual fact is a good thing, because if there are no obvious pointers to a full-blown relapse then they can kind of side-step it in the notes which helps my case  with the re-application.

So assuming nothing major happens in the near future there should be no real drama getting my approval for the coming year which is good. All going to plan I will only need this shitty injection for another year and then I can throw it all away and never need it again. Fingers Crossed!

I am still awaiting another MRI just to check the status of lesion activity. The Doc seems to think that’ll be fine, but they still want to have a look, not required for the application at this stage though. Assuming that there is no major change there I will stick with Copaxone for the year as it’s the easiest to ‘wash out’ prior to HSCT.

The bad news of the day was that my Neurologist is finishing up practicing for the CCDHB, so I will have to be passed on to one of the other Neurologists at the hospital. I am a bit gutted about that as Dr Parry has been pretty amazing right through, very approachable, knowledgeable and up front, and more than anything he has been positive and supportive about going for HSCT, which from all other accounts I have seen can’t be said for most the other Dr’s in NZ, so hoping for someone not to negative on that front. Either way it wont change what we are doing, but there are tests, referrals etc that we need from the neurologist that are always going to be easier to arrange from someone who actually wants to help.

Not much else to report. I wont go into a full run down on here about what is happening with the fundraising. I’ll write a full update on that side of things over the next couple of days, but as always a huge thank you to all those that have pitched in and helped or supported us in any way. And Don’t forget to get your tickets for our Dinner – Auction Night. We have so much stuff to auction off and some really amazing items.