My last week this week on the Drug Trial. I am fairly confident now that I am on the Fampyra this time. I haven’t really noticed any vision effects but have definitely been more active and not feeling ‘as’ run-down after doing anything requiring a large amount of energy.

But what really makes me sure I am on it is I have had a nasty tooth infection for the last couple of weeks giving me grief which means the right side of my face constantly aches. One of the primary side effects of the Fampyra is infections, typically UTI’s but seemingly I have been lucky enough to get one in my old root canal. Not much fun, but some antibiotics and pain killers have made it livable at least, will probably do another course once the drug trial is over to kill the infection once and for all. On the up-side it has allowed me to get heaps of yard work done over the last couple of weeks which previously has left me wiped out. I am still pretty knackered afterwards, but I can at least still function and help with the kids and things which I was no good for before.

Will be very interesting to see what the vision tests say in these last tests. My Visual; Evoked Potential test on my bad eye has consistently shown a response time of 175ms (Normal is around 100ms, I am told anything over 130ms is significant), so it’d be nice to see that drop down somewhat, that’s probably the most significant test of the lot that doesn’t really have any chance of being ‘subjective’ given its read directly from lines places on my head reading brain waves. I’ll keep you all posted. Here a pic of my latest yard work, because I am quite proud of it 🙂 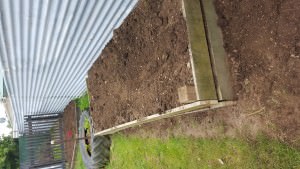