The first injection was administered today and it all went without a hitch, It throbbed and was a bit stingy immediately afterwards, but passed fairly quickly. So this is the first day of the rest of my life with these daily injections as a part of it, I am so relieved to have started some treatment and be moving forward, but its hard to not feel a little anger at MS all over again with this prompt… Nothing can be done about having it, so this is the best course of action for now. Had a good chat with Imogen, the MS Nurse today, and got some clear guidelines on what the criteria is to stay approved, it’s fairly strict, My starting EDSS was 1, which is basically no disability, positive, though I thought a little strange given my symptoms, but hey I am not a Dr. What that means is while I stay below an EDSS of 2.5 I should continue to get approved. 2.5 Is actually fairly low still so fingers crossed we don;t get any major changes in symptoms, relapses in the next year. ultimately that’s the point of the treatment though, to help keep the disease fairly stagnant and delay it progressing. Also saw the report from my second MRI briefly, they have seen progression of lesions on my left frontal lobe which probably explains at least some of my cognitive issues, though Imogen did mention that it can also not be helped by external factors like fatigue, lack of sleep, stress, mood etc so I need to work on reducing those where possible. Also a few new lesions on the Cerebellum, The cerebellum coordinates voluntary movements such as posture, balance, coordination, and speech, resulting in smooth and balanced muscular activity. So that could be an issue if that continues. All in all it’s all a good thing that I have got onto treatment.. Oh, and Danielle hasn;t been able to help herself with the ‘small prick in the arse’ jokes! 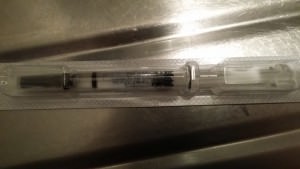